The disease had ravaged Leana’s body for years; her atrophied muscles were barely enough to lift her body from the chair. To make it worse, her twin sister was a constant reminder of what Lea could have been: strong, attractive, and outgoing. She swore to create a new branch of magic she called biomancy to fix herself-and fix others as well. 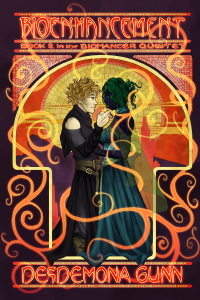 Bioenhancement by Desdemona Gunn is the second book in the Biomancer Quintet, a transhumanist fantasy with a predominantly female cast of characters. Bioenhancement deals with the fallout from the ambitious actions in Biomancy. Ties are broken and pacts are made, forging alliances in a war no one wanted and that no one can really win.

Merritt, Montana is a small town in a large county. Sheriff Buchanan and his team are used to long uneventful days under the big sky, punctuated by the occasional hunting accident or robbery. At first, it appears that the dead woman found on a lonely ridge could be an accident, but the farther they investigate, the stranger the case gets.